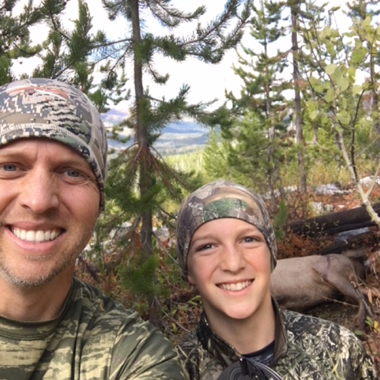 By: Travis Holding (Meet The Writer)

When I really started taking a serious approach to archery elk hunting, I noticed my son who is now thirteen and his younger sister who is eleven had a keen interest as well. That year, I bought them both their own bows and we began shooting together at a local range. Clayton really wanted to archery hunt so he began doing pull-ups daily and whatever else he could to build his strength for the coming season in 2016. His accuracy was spot-on, but he just wasn’t quite strong enough to pull back and hold 40lbs comfortably and he decided to hold off for one more year. Over the next year we spent many hours at the range, participated in 3D archery shoots and tried to create some real life scenarios for him to practice on.

September 2017 rolled around and we were able to get out two Saturdays in a row during the middle of the month, but the elk just weren’t talking. I decided to completely shuffle the playing deck and head to an area that I had not been to for over 5 years, when I did a late season muzzleloader hunt.

We made our way into the area late Thursday night anticipating an early start Friday morning and hoping to avoid some of the crowds that we knew would fill those canyons come Saturday morning. As we crested the saddle, we moved slowly into position where I ripped off a location bugle and we both held our breath in silence, hoping to hear at least one bugle in response. Finally, the ice was broken as not just one bull, but four bulls screamed back at us from different locations in that canyon. I’ll never forget the look on Clayton’s face when I spun toward him to see his reaction – utter joy and excitement! Like a kid on Christmas morning! I said, “Which one should we go after”. Just then he looked directly across the canyon and said “how about the one that is running down the mountain towards us”! We quickly made our way to the bottom of the canyon and positioned ourselves exactly where we thought he was headed. He was pushing a couple of cows in front of him and was headed our way, screaming the entire time. I think I was shaking more than Clayton as we tried to set up for this bull. As it goes, the wind swirled and just as the bull came into that 35-yard mark, he spun around and began trotting directly away from Clayton. He pushed his cows all the way up the center of the canyon. We pursued him for a few hundred yards, hoping to turn him around. By now, we were both a little winded and wet from running through the dew-drenched grass. We decided to re-group and make a game plan to go after a different bull.

We sat quietly, hoping one of the other bulls would give away his location without us having to give ours away.   Patience paid off, and soon enough he did just that. We checked the wind and began making our next play, trying to get as close as possible before giving away our location. Over the next hour or so, we hopped logs, camouflaging ourselves behind as many trees and bushes as we could as we snuck in. This bull was a much larger and wiser bull and had over 60 cows in his harem. Chasing a bull with this many cows’ presents a whole new set of challenges.

Over years of experience, I have learned that if you can position yourself in the middle of the cows, often times the herd bull will get frustrated enough he will come right back to you on a string to battle and pick up the rest of his harem. We snuck in between the herd and started off with some various cow sounds to alert him to the fact that part of his herd was still trailing. The bull stopped on a dime, spun around and looked in our direction.   That’s when I ripped off a couple of challenge bugles and really got his attention. He wasn’t going to have any of that and it only took one more challenge bugle to send him on a dead run down the mountain directly towards us. Shale rock was flying up underneath his feet as he blazed a path in to battle. In fact, he came in so fast that we didn’t have time to move out from behind the tree and position Clayton where he could get a shot. I think that bull traveled 200 yards in less than 10 seconds and we both ended up pinned behind a tree, watching and listening as the bull raked and screamed at us from no more than 5 yards. This scenario kept on for another 10 minutes until the bull became wary enough that he decided it was time to bolt. Even though Clayton didn’t get a shot, that experience alone was enough to hook him for life.

Later that afternoon as we made our way to the bottom of the canyon where we thought some of the elk had settled, Clayton asked if he could rip off a bugle and try out his newfound calling skills. He stepped off the trail about 10 feet and ripped off a crisp one-note, 2 second bugle, followed by lots of chirping (what we all like to do when learning to bugle - right!). I kept on working on my pack when he came running back in excitement asking if I had heard the bull call back. I told him I hadn’t heard anything and asked if he was sure. He frantically pointed and said, “I think he is only 50 yards away”! We made a b-line and tried to close the gap a little more. Well, he ended up being a lot closer than we thought and we soon found ourselves staring face to face with a good 5pt. bull at 15 yards. We both froze, Clayton standing directly behind me. We had a standoff with this bull for 5 minutes or so. I whispered to Clayton to maneuver himself to my left and try to position himself on the left side of the tree that was right next to us, hoping that when the bull spooked, I could stop him with a quick cow call and Clayton could get a shot. That’s exactly what happened, but what I didn’t realize is that Clayton wouldn’t have a clear line of site to the bull from that position. I made a split second decision, pulled back and sent my arrow flying through that bull, double lung at 40 yards. He didn’t even know what happened as he walked 20 yards and took his last breath. It was a bittersweet moment. I was so happy to get our first elk of the season, but saddened that Clayton wasn’t the one who took the shot. He was so excited for me in that moment and showed no signs of regret. We made quick work of deboning the animal and made our way back to the vehicle with heavy packs and full hearts. My mind quickly turned to the next day where I was determined to get Clayton on his first elk.